Whole Body Cryotherapy, is a procedure that exposes the body to freezing nitrogen gas or synthetic air of temperatures ranging from negative 200 to 260 degrees Fahrenheit (93 to 126 degrees Celsius). END_OF_DOCUMENT_TOKEN_TO_BE_REPLACED

CryoAction client, Saracens, were featured in a Sky Sports News segment on their use of whole body cryotherapy and the chamber supplied by CryoAction, as part of their recovery from the rigours of European Champions Cup competition.

Fresh from an emphatic 57 points to 13 victory against Northampton Saints, the Saracens players demonstrated the use of cryotherapy as a key component of recovering from the exertions of the intensive match. and the preparations for the next round. 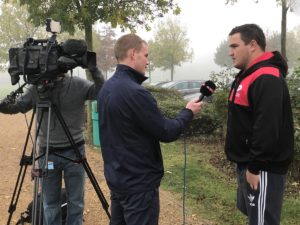 Saracens, British Lions & England players Brad Barritt, George Kruis and Jamie George were on hand to deliver their solid endorsement of the 21st century cooling technology offered by CryoAction, where players are immersed into a walk in chamber where the air is cooled to temperatures as low as -160°C / 265°F. The treatment lasts only 3 minutes and the players use the cryochamber after morning training and late in the afternoon, post afternoon training.

Saracens Senior Strength and Conditioning Coach, Ben Pollard also presented the view of the coaching staff, highlighting the importance of being able to use the cryotherapy chamber to reduce the effects of soft tissue damage post game and to help the players to recover, both physically and mentally. An important element of this recovery, according to both player and coach alike, is the enhanced sleep recovery arising from the use of cryotherapy as a modality.

The CryoAction whole body cryotherapy chamber is one of a number of similar products installed across a number of sporting disciplines with the company supplying a wide range of leading sports teams such as Arsenal FC, Everton FC, Watford FC, AFC Bournemouth and others.

To see the video in full, please click on the image below. 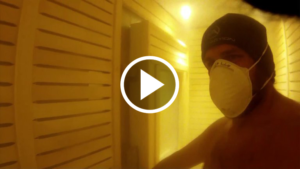