Cryotherapy comes from the Greek words ‘kruos’, meaning ‘icy cold’, and ‘therapeía’, meaning ‘healing’. The word was originally coined in the early twentieth century to describe any medical treatment in which all, or part, of the body, is subjected to cold temperatures.

More recently, though, whole body cryotherapy, which involves exposing the body to cold air, chilled to below -100°c, in a specialised chamber or cabin, for a short period, has become fashionable as a method of evoking natural healing processes. Whole-body cryotherapy originated in Japan in the late Seventies but quickly spread throughout Europe and the United States.

How Does Cryotherapy Work?

Essentially, cryotherapy delivers a short, sharp temperature shock, typically for a period between two and five minutes. Physiologically, the process leads the human brain, subconsciously, to believe that it faces a fight or flight situation.

Consequently, the metabolism works harder to maintain body temperature and circulation increases, transporting oxygen-rich blood, with its payload of enzymes and hormones, throughout the body. Although there is little or no evidence to support the efficacy of whole-body cryotherapy for the treatment of other conditions, including, but not limited to, anxiety, depression, insomnia, fibromyalgia and rheumatoid arthritis, proponents of the treatment believe that it has applications far beyond musculoskeletal recovery and rehabilitation. 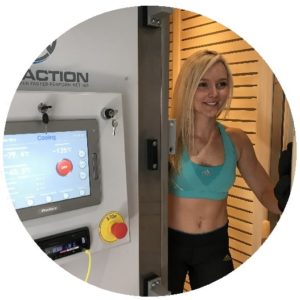 Cryogenic recovery and rehabilitation processes are instigated by ‘cold shock’ proteins, which are believed to counteract the harmful effects of extremely low temperatures on cellular metabolism and help the body to survive. Proponents of cryotherapy also believe amino acids – a.k.a. the building blocks of proteins – and hormones, which prevent degeneration of body tissues, are also released during cryogenic recovery.

Following cryotherapy, the skin returns to its normal temperature with minutes, with many patients reporting diminished symptoms of musculoskeletal pain almost immediately during cryotherapy recovery. Many also report a feeling of invigoration, the effects of which become cumulative and enduring after subsequent treatments.

At CryoAction, we offer prefabricated, self-contained cryotherapy units, available for medium or long term rental. Each unit consists of a cryotherapy chamber, thermally insulated and cooled by its own liquid nitrogen supply, and a separate antechamber, in which participants can change and prepare themselves for treatment. Otherwise, all that is required are a stable footing and an electricity supply, so CryoAction rental cryotherapy chambers provide a fast, unobtrusive method of delivering cryotherapy to a large number of people, especially if space is in short supply.